Central banking is undergoing a major shift from secretiveness to active information disclosure. However, there is no academic consensus on the best way for central banks to communicate with the private sector, so that individual central banks have had to use trial and error, leading to economic instability as epitomized by the global economic crisis following the Lehman shock. Against this background, the aim of this research project is to empirically examine whether central bank communication has been able to gain the attention of and credibility with consumers, businesses, and investors, and if not, why this is the case. Moreover, using macroeconomic and game theory, we aim to construct models in which, under a setting in which the acquisition and processing of information is costly, the type of information that people obtain (what they pay attention to) and its accuracy (how much attention they pay) is endogenously determined, in order to examine the determinants of public attention to messages from the central bank. Based on the theoretical and empirical results, we then aim to design a central bank communication system that helps to raise economic welfare.

Central banks began to actively disclose information on policies from the late 1990s onward. This practice is called “central bank communication with the market.” For example, in the case of the Bank of Japan (BOJ), the minutes of monetary policy meetings – i.e., the meetings at which the BOJ makes its monetary policy decisions – have been published simultaneously in Japanese and English since 2014, and the press conferences of the Governor of the Bank of Japan immediately after policy meetings are broadcast live on the internet. This situation represents a stark contrast from the past, as illustrated by the title of a best-selling book on the central bank of the United States, the Federal Reserve, published in 1987, “Secrets of the Temple,” which indicates that central banking at the time was shrouded in a mysterious veil. Thus, central banks are in the midst of making a 180 degree turn from secrecy to an emphasis on communication, and we are witnessing the kind of paradigm shift that occurs only once every few decades.

The reason for the rapid rise of information disclosure by central banks is that in return for gaining independence from the government, central banks needed to make their decision-making process more transparent. However, what is more important from the viewpoint of economics is that, as a result of the growing role played by financial markets and the concomitant increase in the number and range of “market players,” central banks had to start to conduct their policies by communicating their intentions to a wider audience and factoring in the impact on asset prices. In other words, central banks started to increasingly work on market expectations as part of their policy conduct. The importance of such policy conduct seeking to influence market expectations has further increased amid the so-called “liquidity trap” that has arisen in a range of countries in recent years, where interest rates have been stuck at zero. The reason is that even if current interest rates are at zero and there is no room to lower them further, the central bank can affect people’s inflation expectations and improve current business conditions by signaling that it will continue with monetary easing in the future. This is a new monetary policy channel, called “forward guidance,” which was first outlined in a paper co-authored by Tsutomu Watanabe, the principal investigator of this project (Jung et al., 2005). Following the outbreak of the global financial crisis in 2007-2008, central banks in developed countries around the world have developed policies that rely on forward guidance.

In line with actual policy-making “in the field,” the importance of policies to guide market expectations has also been increasingly highlighted in academia. For instance, Michael Woodford, a leading researcher on monetary policy theory, noted that “not only do expectations about policy matter, but, at least under current conditions, very little else matters” (Woodford, 2005), which implies that influencing market expectations lies at the core of monetary policy. Moreover, both in Japan and abroad, many textbooks on monetary theory are in the process of being substantially revised along these lines. However, as outlined in detail below, from an academic point of view, there are many unresolved issues regarding central banks’ efforts to influence market expectations, and scholars so far have failed to provide clear answers on important issues facing central banks in the actual conduct of monetary policy. This means that central banks in developed economies have had to rely on trial and error, resulting in substantial differences across central banks in terms of the amount of information they disclose and the nature of central bank communication, with no convergence in sight. Moreover, there have a been a number of “accidents” caused by mistakes in communication between the central bank and the market, such as one occasion when market participants misinterpreted the remarks of the Chairman of the Federal Reserve, leading to a heavy decline in the price of U.S. government bonds.

Until the 1970s, economists tended to regard the economic policies pursued by the central bank and government as being exogenous to the markets in which private entities operate and that, consequently, markets could be manipulated at will. Since then, however, the view has emerged that both the central bank and government form part of the market and achieve their policy aims through their contact with other market participants – a view that now dominates. And from this viewpoint, it is of critical importance whether or not other market participants accurately understand the central bank’s policy intentions. It is this – how central banks communicate with the market in getting their policy intentions across – that forms the subject of this research project.

Thus, credibility and attention are key concepts in research on central bank communication with the market. Yet, academic understanding regarding the credibility of, and attention paid to, central bank communication is limited and hence forms a central aspect of this research project. First, to date there is little theoretical and empirical research on the mechanisms determining the credibility of, and attention paid to, central bank communication. Second, practical common sense suggests that it would be counterproductive for the central bank to publicize every single piece of information it holds, but there is no consensus among researchers on a rule or principle regarding what information should (or should not) be released and to what level of detail. For example, one argument that releasing too much information would be counterproductive is that if the central bank relies excessively on influencing expectations, asset prices would simply mirror the central bank’s policy intentions, so that asset prices no longer provide the central bank with information on the current state of the private sector economy (Goodhart, 1975). Moreover, as pointed out by Morris and Shin (2002), if attention becomes excessively focused on the central bank’s communication, people will stop paying sufficient attention to other information. Takashi Ui, one of the members of this research project, has shown the conditions under which such an equilibrium would arise (Ui and Yoshizawa, 2015). However, a deep-rooted conviction on the opposite end of the argument is that central banks are not disclosing enough information, and there has been little convergence among these diametrically opposed views. 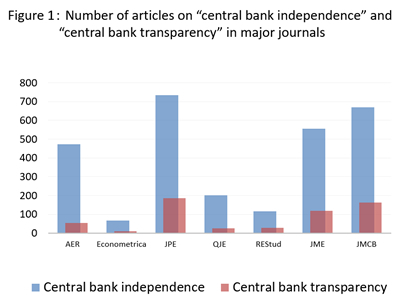 The research project is a large-scale undertaking focusing on a range of issues related to central bank communication and is the first major project on this topic worldwide. A key feature of the project is that it is organized into teams, in which experts in macroeconomic and game theory in charge of theoretical work on policy communication collaborate in theoretical and empirical research with text mining experts analyzing textual information such as documents published by the central bank. In addition, the specific features and original contribution of the project can be summarized in terms of the following three points:

Organizational structure of the research project 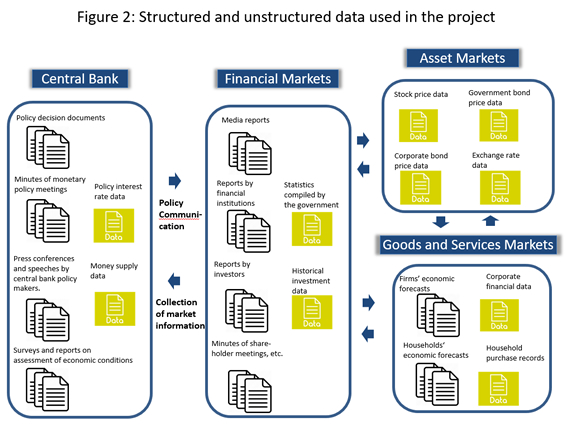 The work to examine central bank communication is organized into four groups. The Theoretical Models Group conducts model analyses using both macroeconomic and game theory. The group is led by Kosuke Aoki and consists of six members. The Survey Group examines the response of consumers and businesses to central bank signals and the causes of such response (or lack of it). This group is led by Kozo Ueda and consists of four members. The Unstructured Data Group explores the current state of central bank-private sector communication using textual information such as policy decision documents and transcripts of speeches by top policy decision makers. The topic of this research is the communication between the central bank and the private sector. Since such communication takes the form of documents, statements, speeches, press conferences, etc., it is necessary to convert such unstructured data into a manageable form to analyze it (see Figure 2). The leader of this group is Takayuki Mizuno, who has extensive experience in research applying text mining techniques in the field of economics. He is joined by Kiyoshi Izumi, who has extensive research experience in the field of text mining and the development of machine learning methods applied to financial markets, as well as Kota Watanabe and Tsutomu Watanabe, who also have research experience in this field. The work of the Case Study Group focuses on information transmission by the Bank of Japan from 2000 onward. This group is led by Kiyohiko G. Nishimura and consists of four members.

The four groups will conduct their research in parallel. For example, after constructing a particular theoretical model, we will test the model using unstructured data and publish the results as one article. Further, to allow members to update each other on the progress with their work, we will hold Skype meetings once a month and workshops to discuss our findings once every six months. In addition, for the research in each of the four groups, obtaining information from, and working jointly with, central banks in Japan and abroad is essential, and we have been able to gain Shigenori Shiratsuka (former director of the Bank of Japan Institute for Monetary and Economic Studies, currently professor at Keio University), Andrew Levin (former FRB senior advisor, currently professor at Dartmouth University), and Oreste Tristani (European Central Bank senior economist) as research collaborators to act as points of contact with these central banks.